After my unfortunate false start in the morning, I turned my attention to the larger task of following the river north. By the end of the day, I had crossed the river six times, that's five bridges and one ferry. Here are my pics from Day 1.

This is the "Crescent City Connection" bridge in New Orleans. It's the southernmost bridge across the Mississippi River, and it's a whopper. Well over two miles long with the road bed 170 feet above the river, it's the fifth-longest bridge of its type in the world. 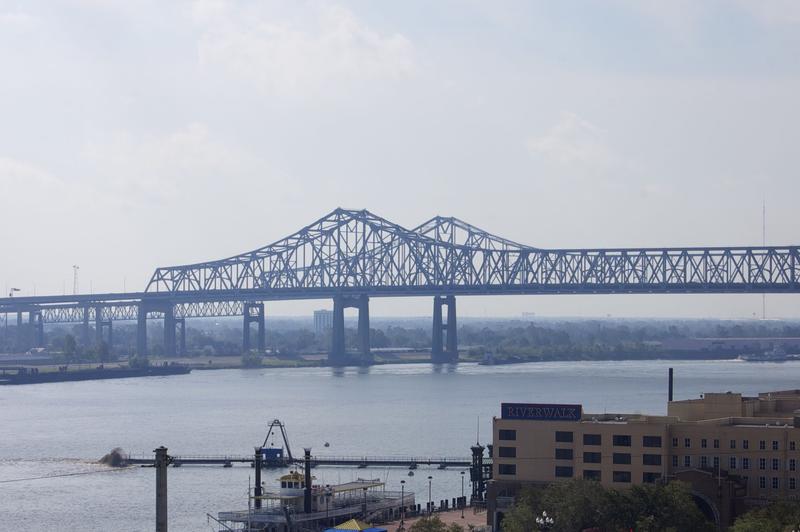 The focus of this trip is the Mississippi River, so along the way I will always be looking for opportunities to see the river and the life and commerce along the river. I figured a tall parking garage near the river would give a great view, and a drive to the top of the Westin garage showed and I was right. 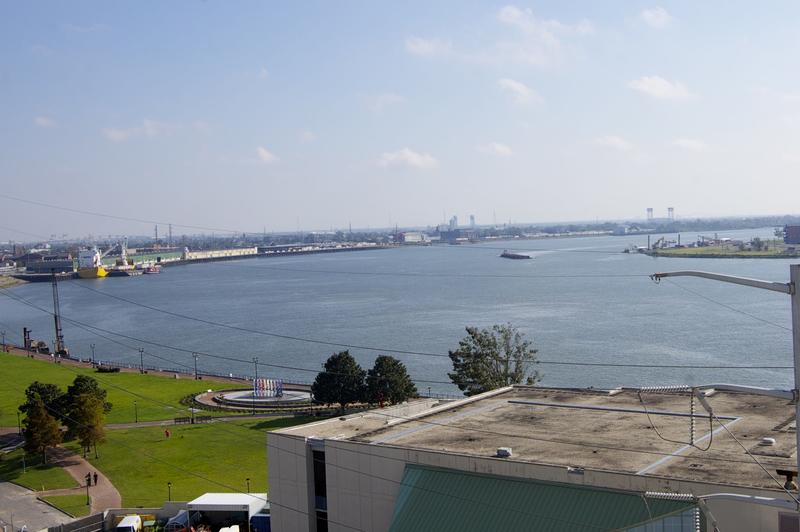 Down below is the New Orleans Riverwalk. It's lined with shops, theaters, benches, monuments and artwork. Nice enough, but lacking charm compared to similar walks in other places such as Austin and Providence. It was also a hot bright sunshiny day, could be much more pleasant in the evening. 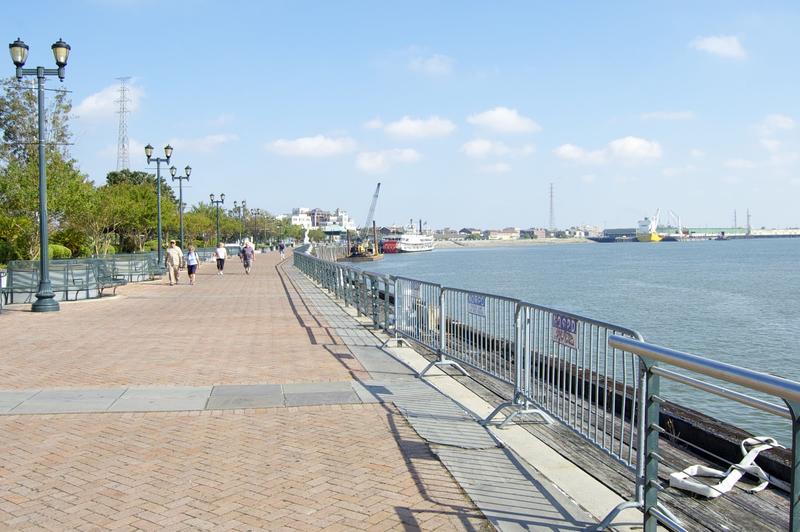 The traffic in New Orleans was atrocious and the roads were horrible. I spent way too much time circling around the French Quarter and downtown searching in vain for nice views of the river and the bridges that also provided a place to park. Finally, exasperated, I crossed the bridge and on the other side found a nice park in the shadow of the bridges. What a lovely spot compared to the hustle and bustle on the other side. 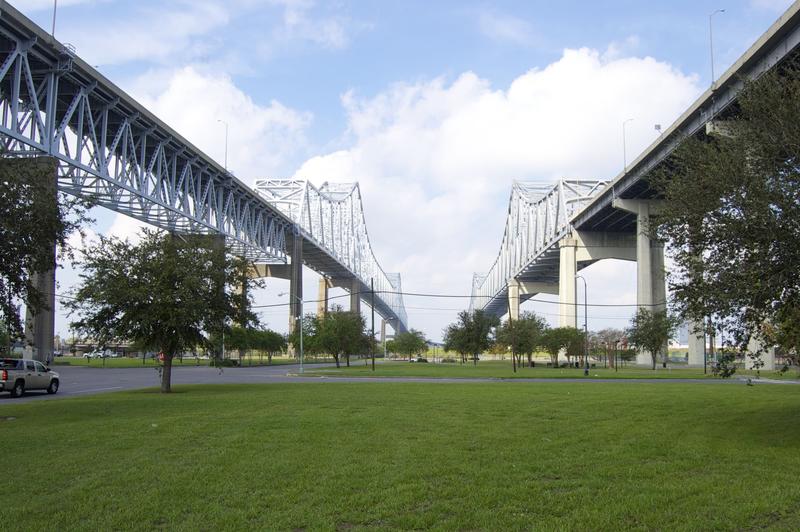 Staying as close to the river as possible, I drove north towards the next bridge. I had set up my GPS with pre-selected routes, but those plans didn't always work. Here's a good example in this drawbridge. Usually when you pull up to an "up" drawbridge, you wait a few minutes until it goes down and then drive across. At this bridge, my keen powers of observation noted the line of cones and barricade and I knew a detour was in order. 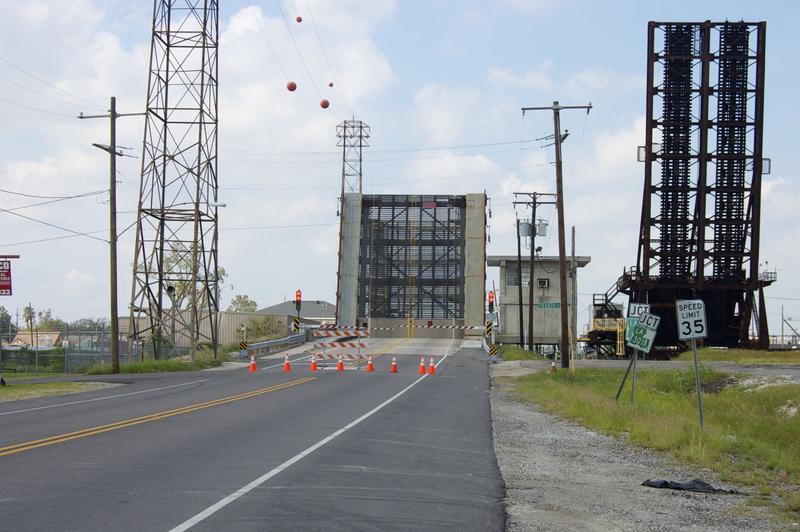 Away from the madness of downtown, I followed the river about 16 miles using the ubiquitous "river road" whenever possible. Because there is a large levy along both sides of the river to protect the city from flooding, there is also usually a nicely maintained road that parallels the levy.

Still in New Orleans, my second bridge is called the "Huey P Long Bridge" which is significant because there are two bridges with this name. This is the first, I'll cross the other one tomorrow. This is the first bridge, although not the last, that is older than me. 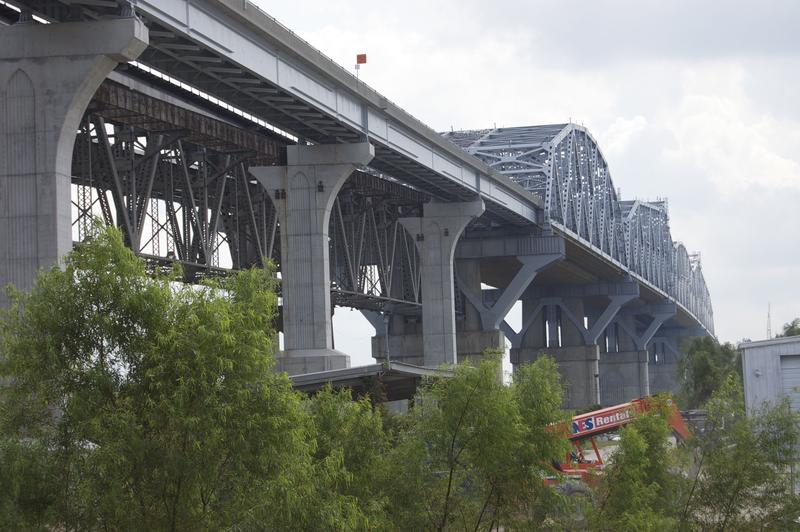 After my headaches downtown, it was fun exploring a residential area at the foot of this bridge.  It was called "Bridge City" and it existed literally in the shadow of the bridge on the west side of the river. More about living in the shadow of a bridge later in this blog. From underneath, I can see that it's actually three bridges, with a railroad bridge running down the middle. 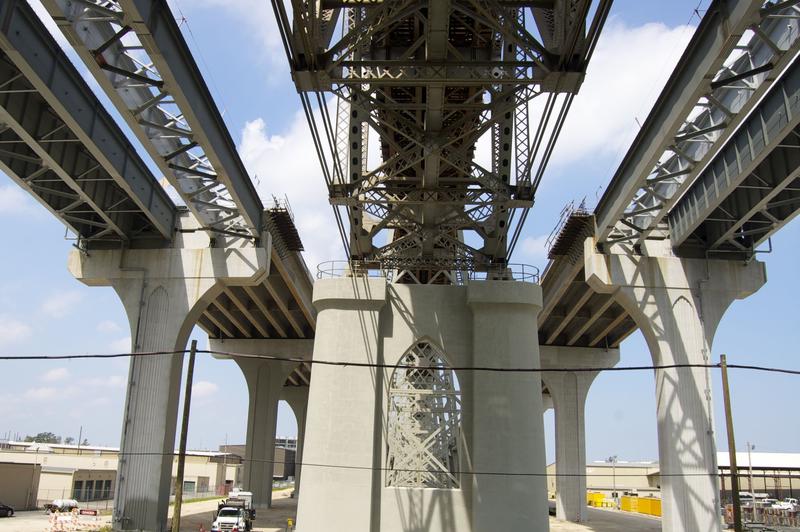 This is the levy. It runs along both banks of the river for hundreds of miles. Through New Orleans and for quite a distance north, there is a paved pedestrian/bicycle trail. Over the rest of this day I would climb (no cars allowed) the levy many, many times. It's usually the only way to see the river. 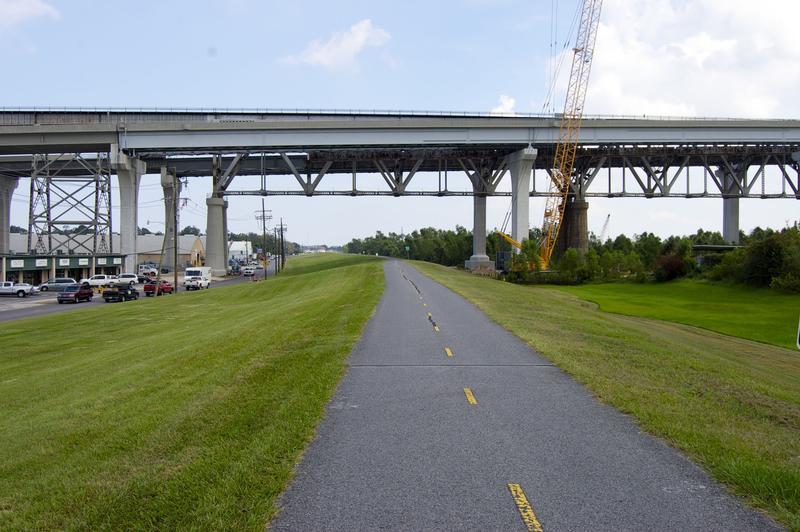 Along both sides of the river is a continual ribbon of commerce. Every time I climbed the levy, I saw ships and barges and industry of all sorts. 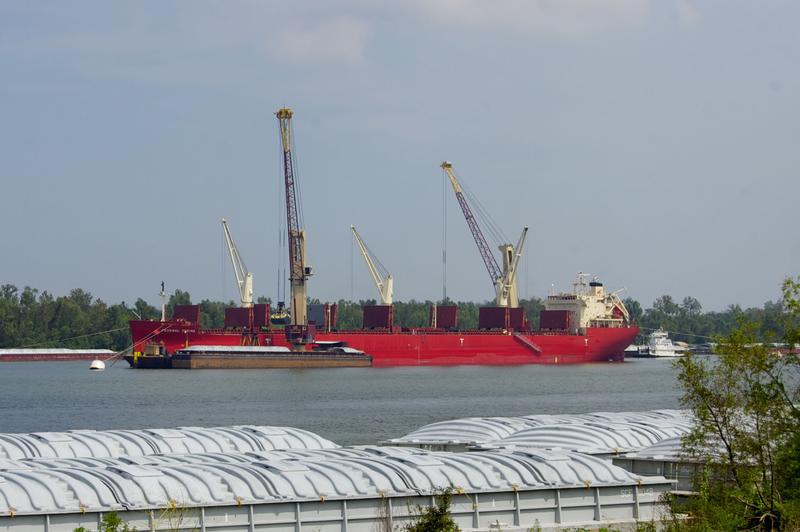 Again following the river road, I worked my way about 20 miles up river to the next bridge, called the Luling Bridge (aka the Hale Boggs Memorial Bridge). I've left New Orleans behind, but haven't left the suburbs. This bridge has a much more modern look, as well it should having been built 50 years after the previous bridge. I was starting to get the hang of driving and spotting places to park and/or take pictures. 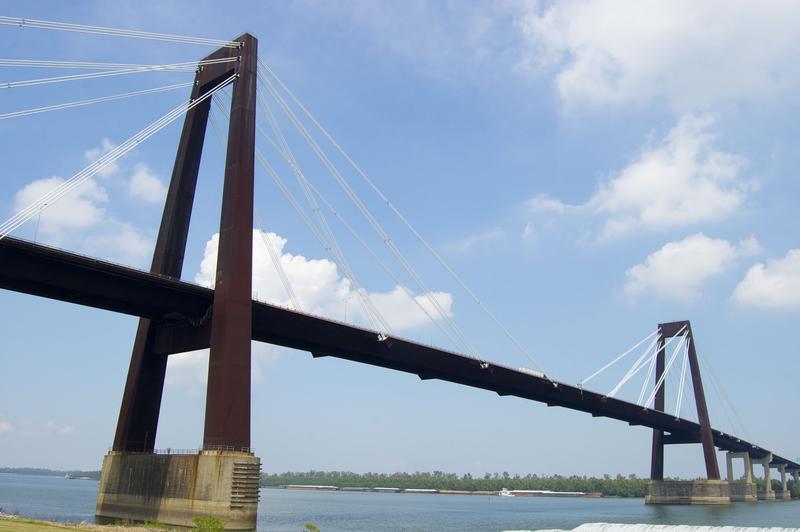 The footing to this bridge was enormous, it seemed to go on forever. Clearly built as protection against flooding, I would look askance at that if I were shopping for a place to live. 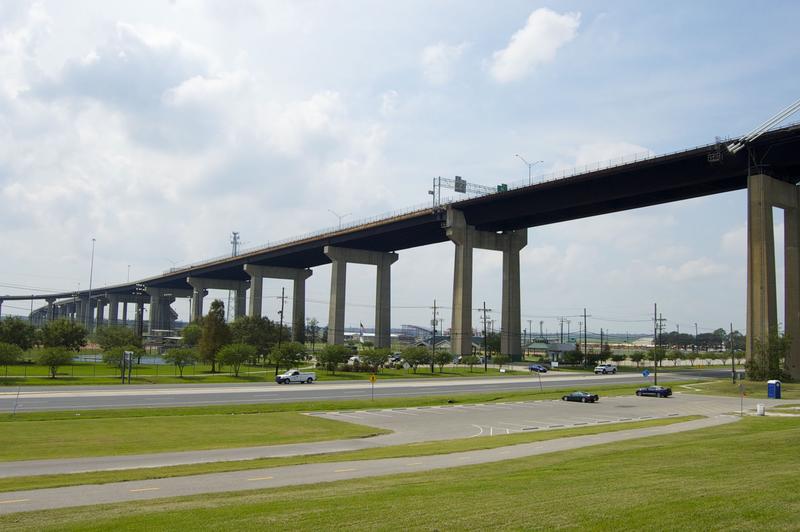 On the other side, I climbed once again to the top of the levy. 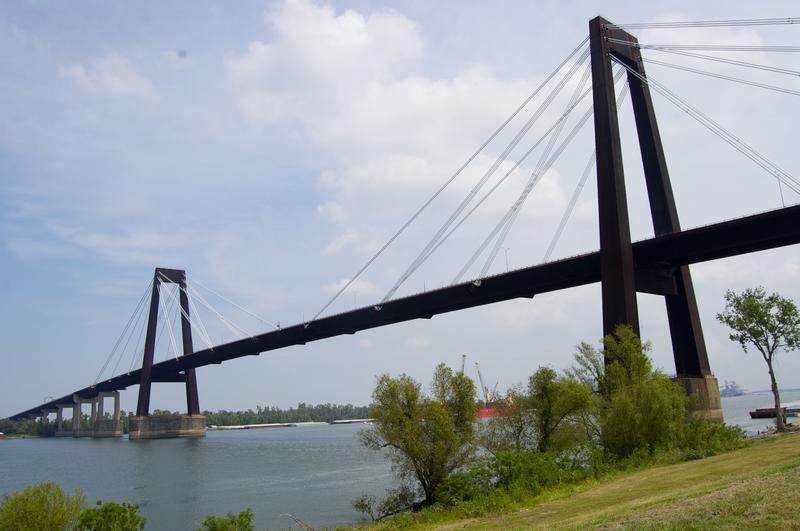 This place was rather unique because it offered convenient access to the water, itself. I clambered down the bank to dip my sandaled toe in the Mighty Mississippi for the first time! 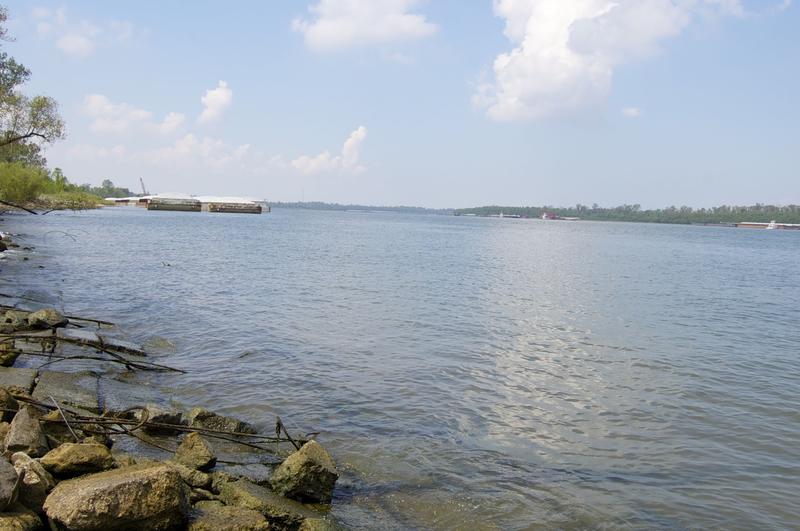 On the road again, I've got about 30 miles to go before the next bridge. I've been alternating back and forth between east and west sides of the river, so the luck of the draw has me on a more rural track for the first time today. I'm still on the river road and I'm learning that means lots of scenes like the one below. 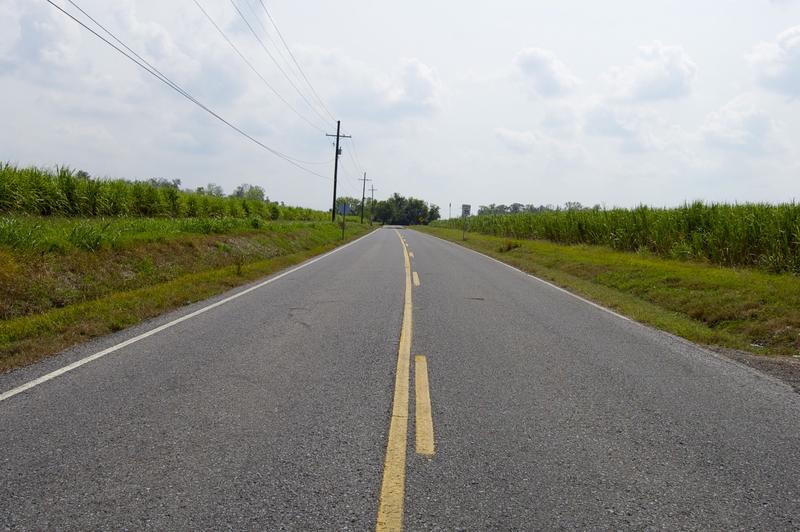 Next up, the Gramercy Bridge (officially called the Veterans Memorial Bridge), a cantilever design that looks curiously old-fashioned, but in reality is one of the youngest bridges on my route, having been opened in 1995. 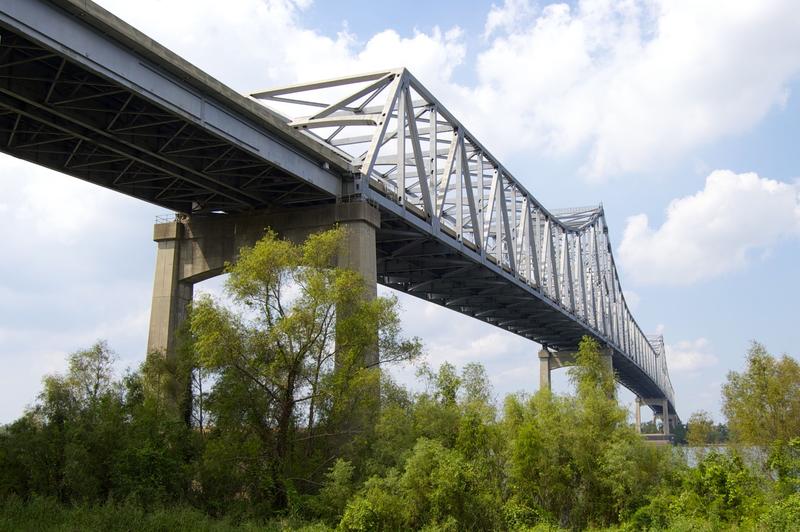 Once again, climbing the levy proved to be the best way to view the bridge. I've finally left behind the constant stream of civilization and commerce in New Orleans and its immediate suburbs. 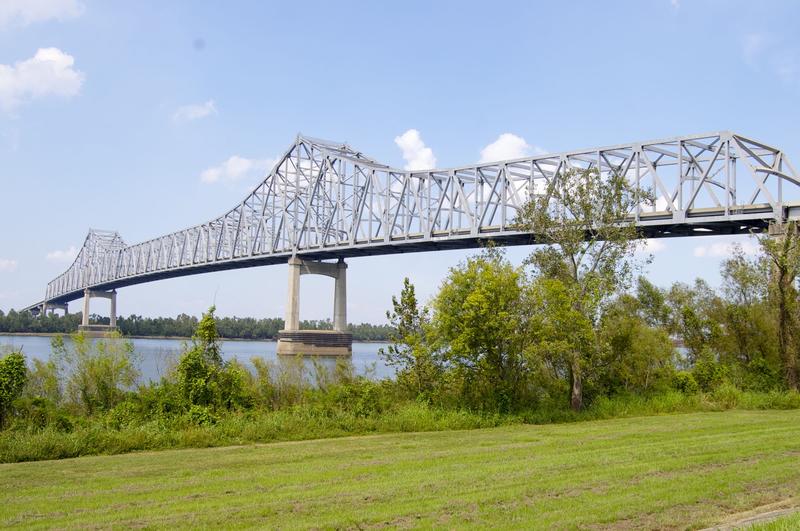 And the paved levy road with the dashed line down the middle is gone as well, replaced by a gravel track that stretches to the horizon in both directions. 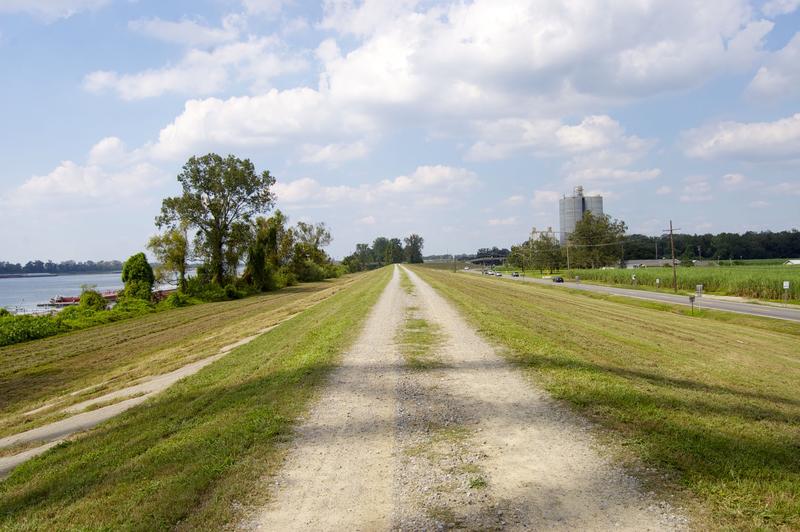 25 miles down the (river) road, I come to the Sunshine Bridge. Yet another old school cantilever bridge, it towers over the surrounding landscape. Yet again, I was able to park and climb the levy for a great view. 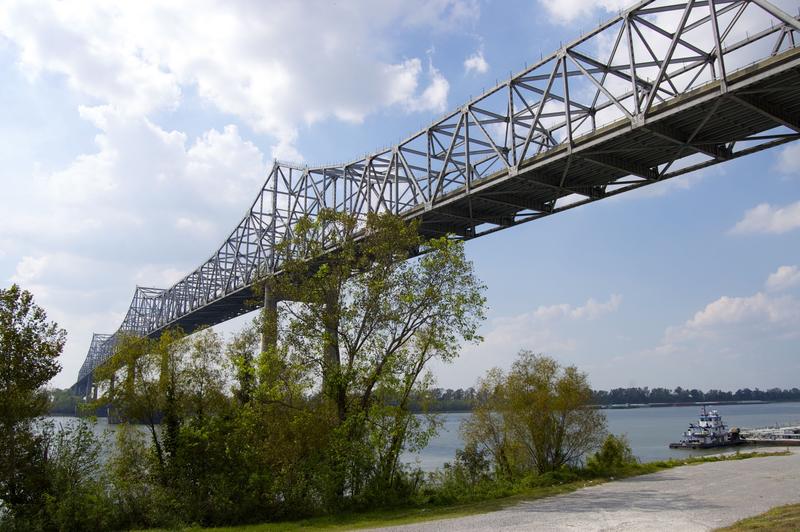 I left the cities behind, but not the tugs and barges 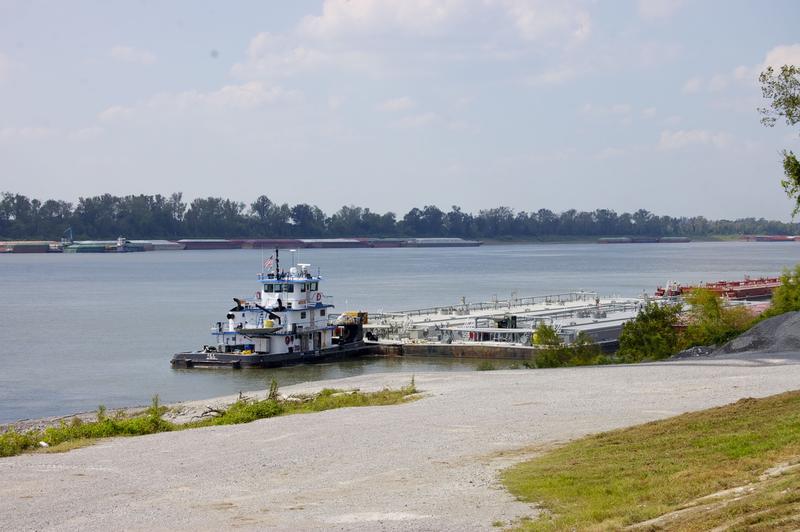 My awesome little car which has served me so well, waiting at the base of the levy to take me to the next crossing. 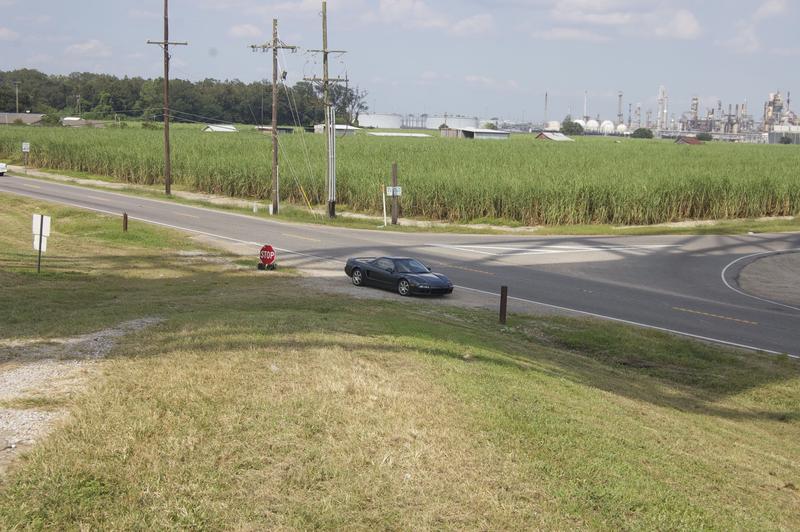 Here's a parting shot of the Sunshine Bridge that really shows its size. Visible, literally, for miles. Consulting my maps, I see it's 90 minutes or more to my next crossing. Where all the bridges before this were about 1/2 hour apart, the interval will lengthen  considerably from now on. 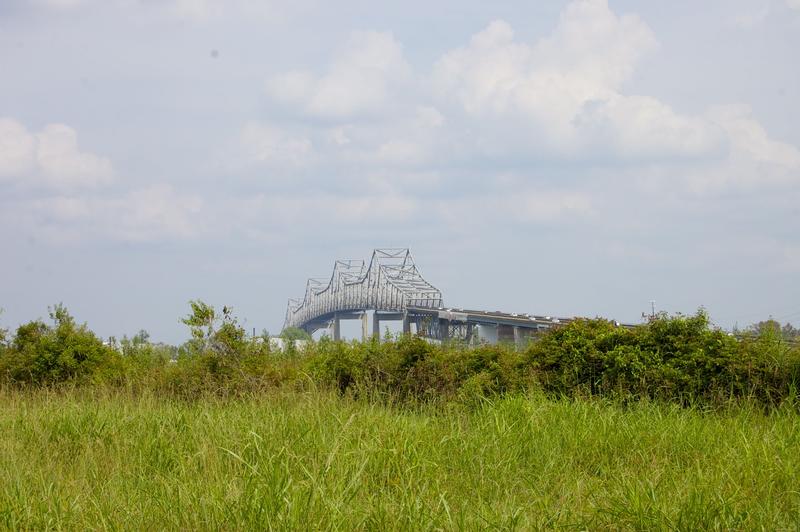 My last crossing of Day 1 is not a bridge at all, but a ferry. I came upon it all of a sudden and was in line before I knew what was happening. Creeping forward, the ferry filled up before I got on. I was to be the second car on for the next crossing which was scheduled for 1/2 hour later. I decided to wait.

This is the ferry terminal. It's simply a dock for the boat and a ramp to drive on. 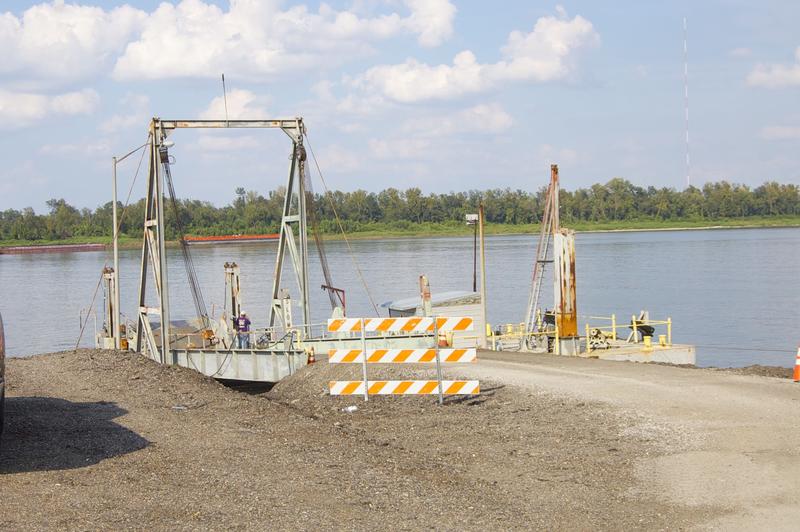 Across the river in the distance, I can see my ferry unloading and reloading prior to the trip back. 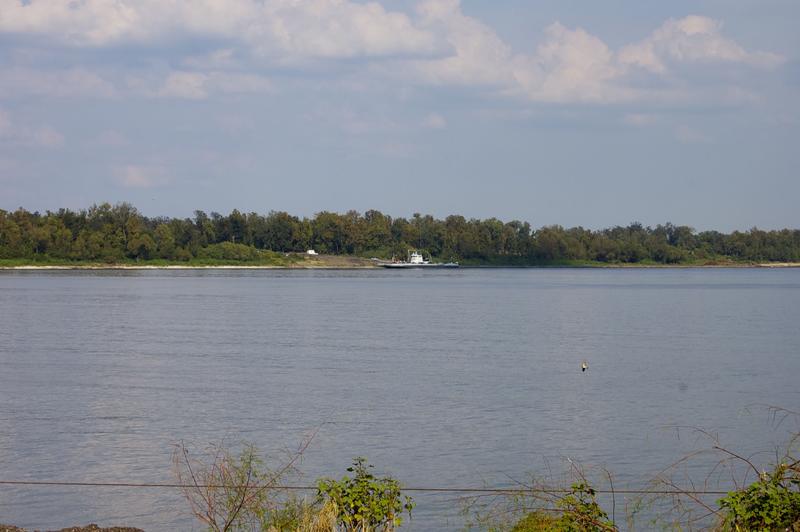 The ferry holds about 40 cars, so it takes a bit to load. In the meantime, barges roll by. 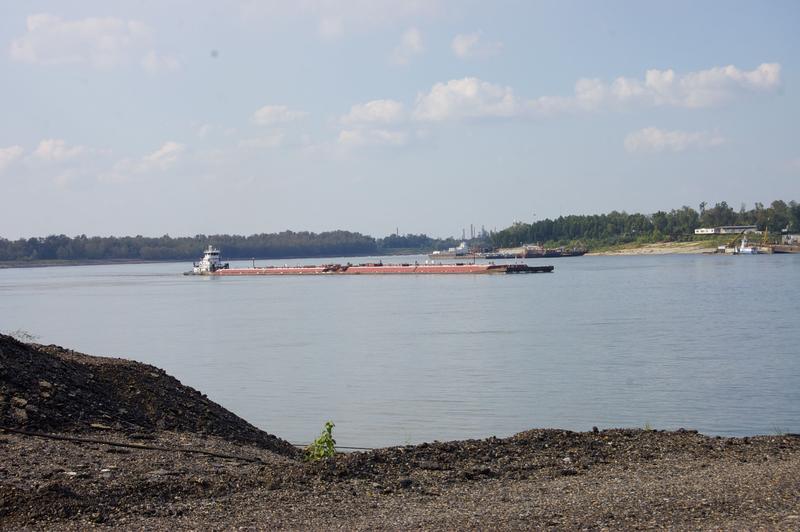 I decide the classy thing to do is take my roof off for the voyage. 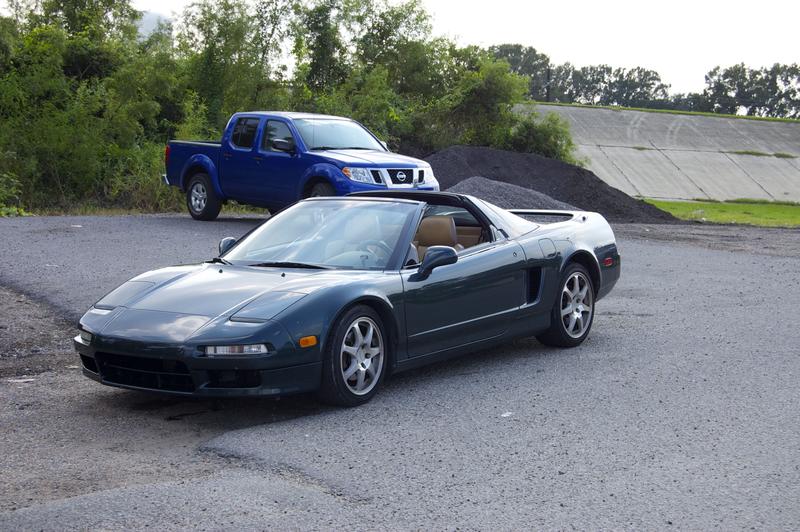 Soon enough, the ferry returns from the other bank with a load of cars. They get off, we get on, and we're headed for the other side. 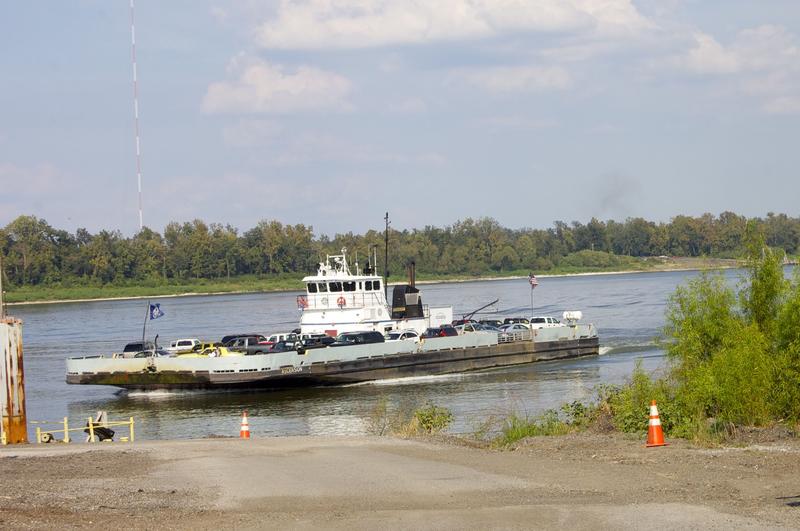 Keeping me company for the trip across, this fine young man and his Genesis Coupe who struck up a conversation with me about my NSX. Sadly, I can't remember his name, but I gave him the address for this blog, so if you're reading this, send me a note! 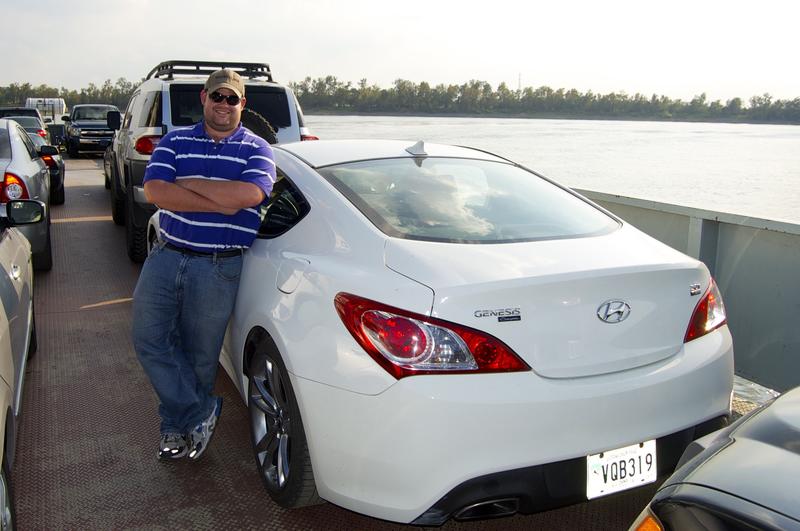 And that was the last crossing for Day 1. Stay tuned for Day 2!